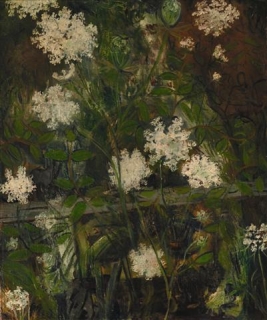 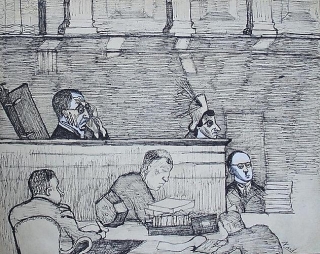 Alice Neel was born on January 28, 1900 in Merion Square, Pennsylvania and grew up in Colwyn, Pennsylvania before attending the Philadelphia College of Art and Design (now Moore College of Art) from 1921 until 1925. Her father was a clerk for the Pennsylvania Railroad; her mother could trace her lineage back to a signer of the Declaration of Independence.

She always wanted to be an artist. She is primarily known for the expressive portraits she began to paint shortly after moving to New York City in 1927. She prefered the term "figure painting" to "portrait" with its connotation of hackwork and flattery.

In 1925 Neel married Carlos Enriquez, a fellow artist who took her to Cuba to live with his wealthy family. It was Neel's leap from Colwyn into another class and culture, a bohemian life. In 1927 they moved to New York City with their baby daughter, Santillana; the child died of diphtheria before she was a year old. A second child, Isabella, was born in 1928. By 1930 the couple found it impossible to support themselves in New York. Enriquez took Isabella to Cuba, ostensibly for a visit, but then went on to Paris by himself to paint. Alice Neel refused to have the child with her, and Isabella remained in Cuba.

In 1932, she began to work at the frantic pace she maintained to the end of her life. Eventually Neel broke down over the torment between her love for her child and the need to paint. In the summer of 1930 she suffered a nervous breakdown and attempted suicide. The horror of the year she spent in confinement stayed with her but being encouraged to draw again was what finally made her attempt to get well successful.

In 1931, she headed for Greenwich Village and the bohemian life her psychiatrists had warned her against. She took up with Kenneth Doolittle, an intellectual sailor and opium smoker. During the 1930s and 1940s Neel painted the city and its residents, using her friends, family and neighbors as subjects, especially after she moved to Spanish Harlem. She worked for the Federal Art Project of the WPA from 1933 through 1943, developing her interest in radical politics and culture. She was required to turn out an oil painting every six weeks, and was paid $26.88 a week for her street scenes of New York.

Neel continued to seek out opposites in her life. She enjoyed painting scenes of the lower depths all day and then dining at the Harvard Club with John Rothschild, the "super-aesthete" whom she had met at an outdoor art exhibition in Washington Square. He fell in love with her and her paintings and would remain her friend until his death in 1975. Jealous of Rothschild's courtship of her, Doolittle slashed sixty of her paintings and burned three hundred drawings. It took her years to recover.

In the winter of 1935-36, she met Jose Santiago, a Puerto Rico guitarist and nightclub entertainer, who became a substitute for her Cuban husband. He left her in 1939, shortly after their son Richard was born, but she stayed on in Spanish Harlem for twenty-five years, raising their son and another, Hartley, by the Russian filmmaker and photographer Samuel Brody.

Neel's art developed independently of the numerous styles and groups that succeeded one another from 1930 to 1980. She refused, indeed was unable, to flatter her subjects; combined with her insistence on recording the complete personality as she encountered it in painting resulted in producing a body of portraiture remorseless in its honesty. Neel's sitters rarely purchased the finished portraits, possibly a testimony to this accuracy. She died on October 13, 1984.

Sources:
National Museum of Women in the Arts Catalogue.
"Alice Neel and the Human Comedy" by Judith Higgins in ARTnews, October 1984
"The Human Creature" by Ann Sutherland Harris in Portfolio, December/January 1979-80
From the internet, AskART.com